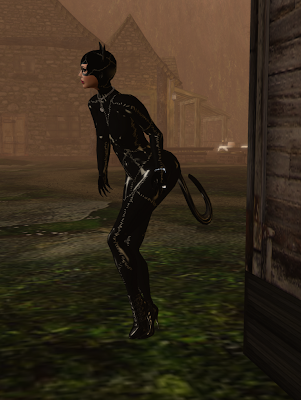 Last time I left you I was about to head off to snoop around April's cottage to see if I could aquire anything that would help aid my shopping addiction.  Of course, unbeknownst to me I had been spotted in costume.  I stealthily snuck my way though Dolly's and over the hill to April's grottier, more dangerous side of the island.  You never know what kind of riffraff she's got lurking around, so I had sharpened my best weapons, ready to gouge anyones eyes out who got in my way. 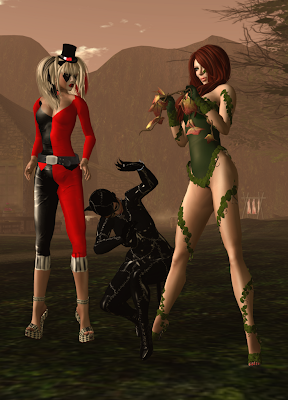 Unfortunately I wasn't expecting to run into a couple of well known, feisty super villains.  Before I knew it they appeared out of nowhere and accosted me, even my claws couldn't save me from these two. Although, I did manage to leave them with some trademark cat scatches in the struggle.  The blonde was a nasty piece of work, she grabbed me by the tail and you don't want to know what she did next, while the scantily clad, confident redhead bound me with poison ivy then hauled me to April's cottage.  At least I reached my destination, albeit, not quite as planned. 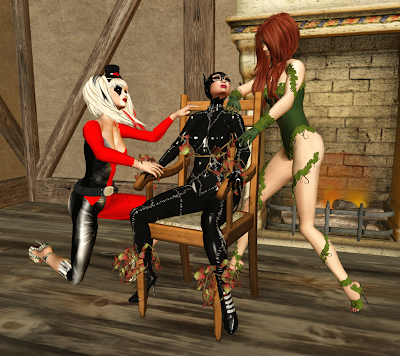 There they strapped me to a chair and started their interrogation.  Me being my usual stubborn self at first refused to cooperate when they asked me if I knew anything of a certain robbery that occurred a few weeks past.  After some venomous threats they dealt me the biggest blow.  They were going to tell my husband if I didn't confess.  The last time I got into a tiny spot of trouble it ended up with me clearing the paths of horsepoop with a teaspoon, and cleaning a mangy, skanky horse.  I knew Mr Q would believe them, he knows me and my mischief making all too well.  So I admitted the offence and the only way of keeping my crooked ways a secret was if I joined the darkside and help them in their mission to take over the island, and one certain caped crusader. 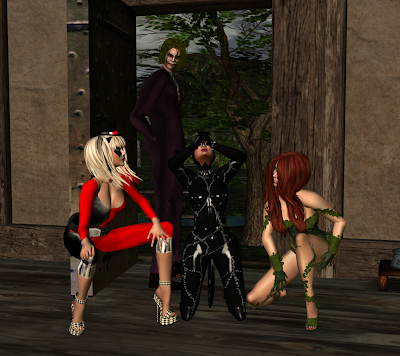 So here I am on my knees, pledging allegiance to the dark side, committing myself to the cause and no doubt dropping myself into the biggest plot of mischief I've ever gotten myself involved in.  Secretly, I also prayed for someone to save me.  All I wanted was to pilfer some cash to go shopping with.  What have I done?  And who is that lurking in the doorway? 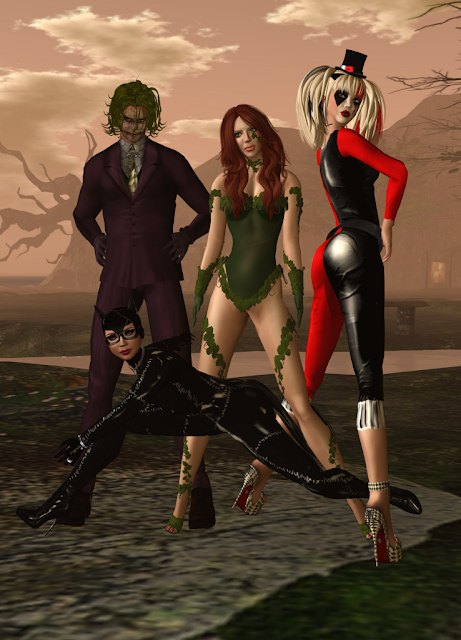 I soon learned the creepy guy with the funny face was the man in charge of the other two vixens, apparently he calls the shots and is also Batmans biggest enemy, The Joker.  How in hell did I manage to get myself into this mess, and who is going to save me from a life of crime?  For now I will just have to go along with it, heaven forbid they drop me in it with the other half.  He'd go bananas!