When we last left this story, Ayla was trying to convince the readers that she was just a good girl caught up in the dark forces of three bad super villains through no fault of her own.  Well, judge for yourself, reader, just how innocent she is.

A little scheming and plotting occurred since then, and the super villains launched a plan to capture the only truly good guy in this story so far, the Caped Crusader. 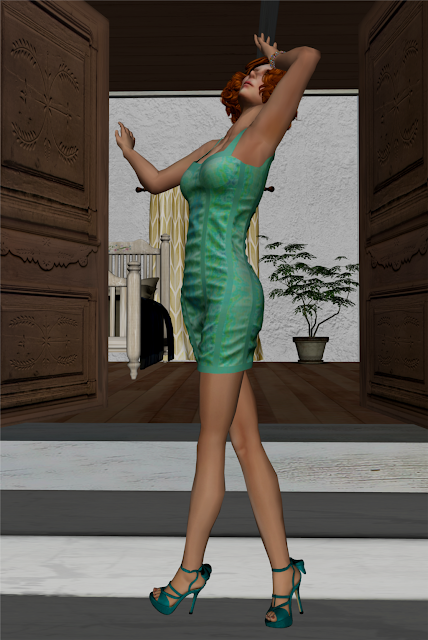 Dolly's job was to lure the Dark Knight to her by pretending to be in distress.  After all, Batman may have figured out Ayla's secret identity, but Dolly and April hadn't shown their true colors.

Knowing he could never resist a redhead in distress, Dolly donned her very sexy new coldLogic dress, her Dura hair and pretty Nardcotix strappy sandals with the bow on the back.

She stepped out of her bedroom door and struck a pose of despair and called out faintly for help. 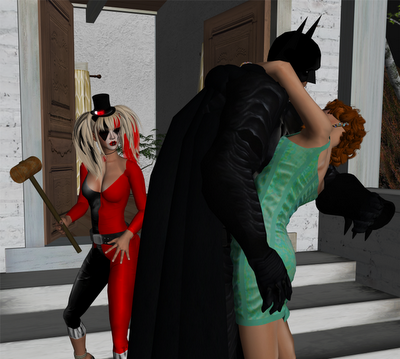 When the Dark Knight appeared as Dolly knew he would, she sobbed prettily and incomprehensibly about her manufactured troubles.  To distract him from April, mallet in hand and dressed as Harley Quinn sneaking out from Dolly's bedroom, Dolly pressed against him, threw her arms around his neck and planted a big kiss right on his lips. She'd always wanted to do that anyway.  It's not every day you get to kiss a super hero.  Batman was a little surprised, but was just about to enthusiastically grab Dolly's ass when Harley bopped him over the head with her mallet and he fell to the patio, unconscious. Dolly wished Harley had held off long enough for the grab-ass. 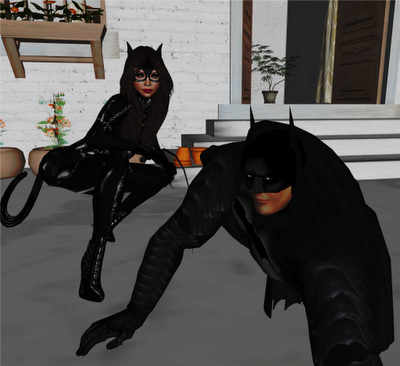 Catwoman - remember Ayla? - watched over Batman while Dolly slipped quickly into her Ivy costume and Harley Quinn reported the capture to the boss.  Batman was a bit confused, but Catwoman's whip made the point pretty well that he was in trouble. 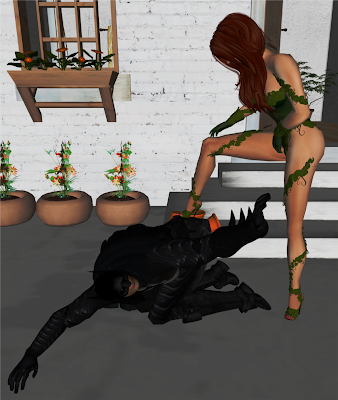 In his weakened and muddled state, he was unable to retreat, or even to think about using one of his remarkable gadgets to help him escape.


Besides, he wasn't sure he wanted to escape from the redhead's kisses and the leather clad woman's whip.  When Dolly prodded him with her stiletto heel, however, he looked into her face, noticed that she was wrapped in ivy vines, and realized he'd been duped.  He always was a sucker for a redhead.
Harley Quinn returned with the Joker who was very pleased with the work of the super villainesses.  Batman groaned, his head still aching, as all four of the villains stood over him gloating, the Joker's mad cackle making his head throb even worse.

To be continued in all its silliness... 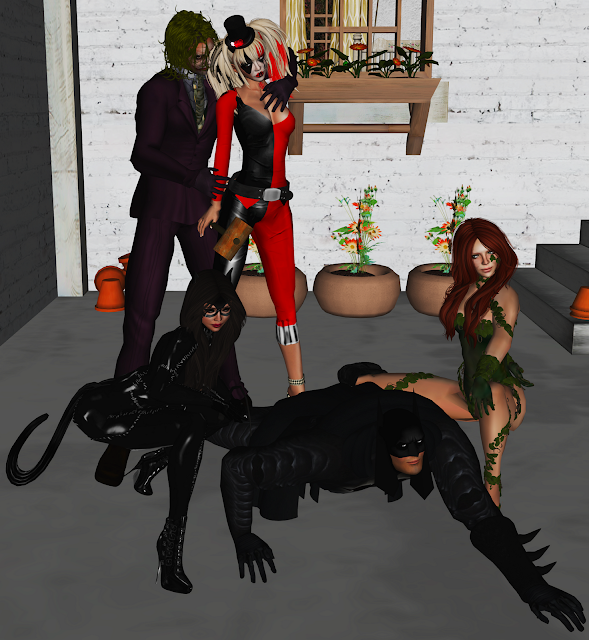 Poses rule, and Aprilmae Devin created all the poses in today's installment of our web story. Animatrix Devin is the owner of Alterior Motions, a kinky adult only animation store, although I've managed to convince her that modeling poses can be fun, too!  Also thank you to Ayla, April, Clay Cowen and Friar Tyles for participating as story advisors and models.

This all started when Ayla blogged Olive Juice's Predator poses.  The blog posts in order if you want to catch up are here: