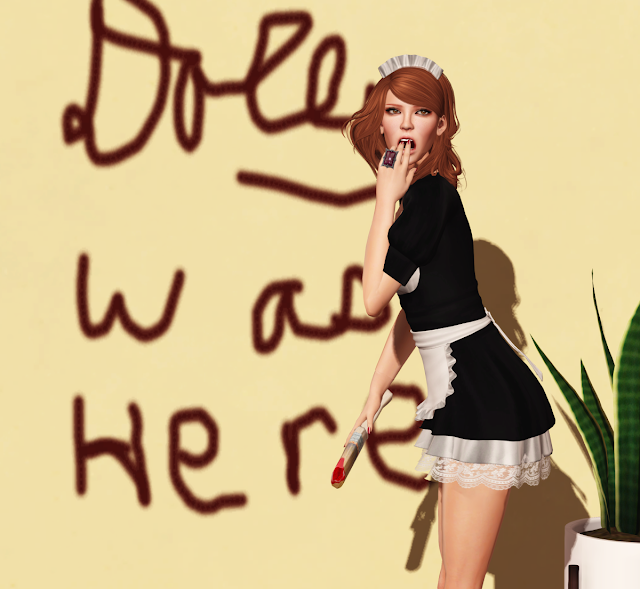 Strawberry Singh has started her blog memes again. Hooray! Last week was a "what did you do for New Year's Eve" meme. Mine was too uneventful to blog about. My friend who was going to spend the evening with me came down with a cold, my sons had friends over and I spent New Year's Eve staying out of their way. YAWN!

This week's meme is about practical jokes - jokes I'd played or had played on me.

Meme Instructions: Share one or more practical jokes that either you have played on others or others have played on you inworld. If you have pictures or videos to share of it, even better. Don’t forget to leave a link to your post in [Berry's] comments.

I hung my head and sighed. I couldn't think of a single practical joke! I asked Ayla for help and she couldn't think of anything either. I threw a surprise SL party for her and her RL husband to celebrate their real life wedding, but other than getting them to the party under false pretenses it wasn't a joke.

We decided we were awfully, awfully boring, or forgetful or both. She logged for the night and at that minute I gave my forehead a slap. I remembered the day we decorated our friend Friar's home with grafitti. I still had my grafitti, so I recreated the scene of the crime, maid outfit and all. Here's the original picture! Ayla's was a god awful rendering of body parts. Maybe she'll share it. I got caught (go figure, how'd he guess it was me?). Here's a bit of our conversation about the matter:

Friar Tyles stands tapping his medieval foot on the floor as the lass begins to clear the wall of the strange symbols know as 'words'. With a devilish grin he tilts his head to the side to catch a glimpse of the lovely thighs on display and says...'I'm not sure who Ayla was but her friend has a good grasp of anatomy'

Dolly Baroque squints at the crude drawing above the fireplace and says, "Anatomy? Like the stars and such? I suppose it does kinda look like a rocketship, but what's that other thing? Twin moons?"

Friar Tyles bursts into peels of laughter at the misunderstanding. Pointing at the "W" with two dots at the centre hs tries to keep a straight face as he says...'I believe that is the constellation 'breastus major' also know as the funbag constellation'

Dolly Baroque turns to look at him, bowing to his superior wisdom. She was not likely to tell the gentleman what SHE thought the picture looked like.. not a rocketship and stars, that's for sure. "Well you'd know best Sir..." she says sweetly and turns back to the wall scrubbing.