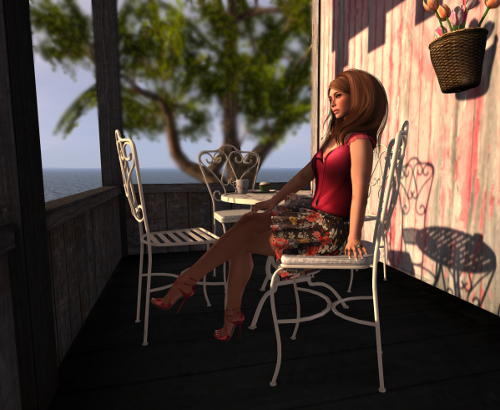 I'm back. Again. Yes I know my blogging has been a bit erratic in recent months, well more like 9 months, since I first took ill.  The good news is my health is slowly improving, I'm feeling fitter than I've felt in many years, but it's not all been easy. You may or may not have missed my presence on Second Life or Plurk, and I don't feel that I have to explain, but I want to, perhaps the only reason being that it's selfishly cathartic.

Last August I was admitted to hospital with a rare liver infection, the doctors still don't know what caused it, even after a plethora of tests. Things improved after a couple of rounds of antibiotics, but again in January I had a reoccurrance and was laid up in bed for the first 2 months of the year. At the end of February, the day before my birthday in fact, I got a call from the Doctor with MRI results. The infection had cleared up but there were changes in my liver the doctors weren't happy with. Basically, they diagnosed me with a fatty liver or Non Alcoholic Fatty Liver as it's properly known. As you can imagine, this was an extra blow to my health that I just wasn't expecting. Yeah, I have always struggled with my weight, yeah, I guess I was classed as obese, yeah, I was quite unfit, but you really don't realise what effect it has on your body until it smacks you in the face.

At first I blamed being on my computer so much. I hated it, it was switched off for two months. I blamed six years of being on Second Life every day for hours on end. Partly that was true, but in reality, I only had my own lazy arse to blame. I made the choice, the choice to sit at my computer all that time, I was the one who let it get to the stage where I was putting my health in great danger. Having chronic depression and anxiety hasn't helped, but again, I chose to let that stand in my way of being healthy.

That day, when my Doctor called my house to tell me the bad news, something snapped in me. I got out of my sick bed and I swore that things were going to change. I have four beautiful daughters who need me, one of whom is autistic. My eldest daughters are broody (not allowed to have babies yet though!) and it made me think, I want to be a fit and active Grandma. My husband, the poor man. He puts up with so much, without complaint. He loves and cares for me unconditionally and I need to be well for him, so I can be the wife he deserves.

Anyway, I'm rambling a bit, I know. I'll finish up by telling you since February the 26th this year, I have lost a total of 2 stone 2 lbs (30lbs for the US guys) and I am feeling a million dollars compared to how I was for the first two months of the year. I am determined to be healthy, I go walking whether it's raining or blowing a gale out there and I make damned sure get my half hour or exercise a day and eat healthily.

I will be on Second Life, but not at much as I used to be. I'll still blog when I am inspired or just for the fun of it, but Second Life isn't allowed to dictate my real life anymore, I just can't afford it to.

Now on to the picture! When I logged on for the first time in two months last week I had a whole lot of shopping to catch up with. I love this little dress from Zaara, you'll all know by now that you can pick it up at Fameshed. I changed my skin when I saw this one from Glam Affair at this months Collabor88, perhaps a little darker than I usually go but what the hell, it's summer (almost). The table set from Lisp can also be found at Collabor88 and it comes in a few different shades and is filled with cute animations.